LANCE METZLER CONFESSES - IT'S ME!

KICK IT!
Rockingham County Manager Lance "L Train" Metzler has admitted the ICE ICE BABY video is him.
Eden Chamber of Commerce Grand Pooh-Bah Randy Hunt overheard the confession. Randy is the husband of Gerri Hunt who is the head honcho at the Reidsville Review.
Do you think the Review will report on "L TRAIN'S" dance moves?

I'm guessing the Review won't touch this warm and fuzzy story with a 10-foot pole.
Posted by Ricardo Montobon at 10:04 PM No comments: 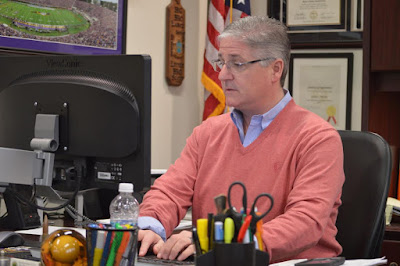 Yes, it really is the County Manager.

Be sure to notice the tambourine between the legs and on the butt.

Metzler is a long-time fan of VANILLA ICE.

Posted by Ricardo Montobon at 7:23 PM No comments:

An Obscene Call to Local Resident

This is a voicemail to Herb Moniz. He believes the caller is Rockingham County Commissioner Craig Travis.
Several others have identified the caller as Craig Travis, including Travis' fellow Commissioner Keith Mabe.
The call came from a phone number registered to an AT&T business office in Burlington. The number is 336-570-4607. Craig Travis works for AT&T in the Burlington area.
Moniz has contacted AT&T as well as the Rockingham County Sheriff's Office and the State Bureau of Investigation.
The caller calls Moniz "a piece of shit", accuses him of distributing drugs and raping women. and says "I'm going to get you".
As you can imagine, Mr. Moniz is not happy about the phone call.
This will come up more as we approach the November election. This is an embarrassing situation for a Commissioner candidate who is already considered unstable.

Posted by Ricardo Montobon at 12:31 AM No comments:

And lo the Commissioners said, "In Jesus' Name. Amen."


DON'T PRESS PLAY UNTIL I TELL YOU

If you are extremely religious, which I know about 90 percent of you are, you should not read this article or watch the video.  It will surely offend you and you will hate me.

The video is almost six minutes long.  You have a busy life.  You should probably move on.  Don't take a chance of being offended.

YOU HAVE BEEN WARNED.

For years I attended Rockingham County Commissioner meetings or I should say I attended monthly Christian services hosted by the Commissioners.  Over the years the services varied in intensity, but they were always Christian.  And, why shouldn't they be?  Hundred percent of Rockingham County citizens are Christian and support mixing Christian prayer with local government business.  It's the American Way.  Forget the Constitution, it's for heathens and people who like to carry AR-15s to the grocery store.

City Council members say Christian prayers and the School Board used to pray but chickened out after warnings from their attorney.  Occasionally a School Board member, like Herman Hines or Wayne Kirkman, would ignore the warnings and break out a Jesus prayer.

Despite fitful demands from good Christian member Ron Price, the School Board sits in silence and contemplates their navels during prayer.  I wonder what they and everyone else is thinking during the moment of silence.

I remember thinking let's get on with the meeting so the Superintendent can tell the Board what to do and Celeste DePriest, Wayner Kirkman, and Herman Hines can futilely bark about the Superintendent's instructions before whimpering away into silence.

If you voted against Craig Travis,  I suggest you keep that to yourself until after the November election.  If you voted against Keith Mabe, it's no big deal...he comes off the board in December and all the other Commissioners are more than happy to be rid of him.  Swilling paregoric, until you're blasted, doesn't make friends, but it does influence people to vote you out of office.

Now I think I will turn this article over to pastor Milton Kennon to fill the room with a prayer to the Lord and Jesus.

I should note the Christian prayer at the following month's Commissioner meeting was said in Spanish with a translator.  If not for the translator, the Commissioners would have been confounded.  But, don't worry, it was also a prayer filled with Jesus.

A Christian prayer said in Spanish and then translated to English is the Commissioners' idea of diversity.

Note everyone stands during the prayer and pledge.  My friend, who made the request to the Commissioners did.  She was afraid not to.  I never did.  Sitting cost me a lot of votes.  Sitting would have cost her.

Per standard procedure, the prayer was followed by a pledge of allegiance and recognition of the Volunteer of the Month.

I have no idea what the Volunteer does and how he or she is selected.  It was apparently too much trouble for the Commissioners to tell the audience, most of whom were there about some zoning matter.  Rockingham County citizens don't really give a shit about anything but zoning.  It's usually about somebody wanting to rezone a piece of property and the request offends all the neighbors.

November's Volunteer of the Month was Nancy Ashby.  Nany hobbled her way to the front of the room to receive her certificate and congratulations.

Listen closely to what Nancy says to Chairman Mark Richardson as she approaches her target.

"I want to tell y'all how much I appreciate you having prayer and doing the pledge.  Don't y'all stop it." - Nancy said.

It was probably Nancy's first and last meeting with the Rockingham County Commissioners.  She just wanted to make sure the rest of the county continues to hear praise for Jesus and pledges to our country.

Indeed it is, Chairman Richardson.

Note:  A group of citizens has sued and a court has ordered the Rowan County (near Statesville, Concord, and Salisbury) Commissioners to cease prayer at their meetings.  The Commissioners have appealed the legal decision to the United States Supreme Court.
Posted by Ricardo Montobon at 3:19 PM No comments: