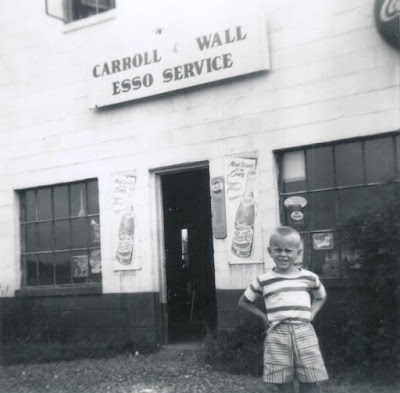 I'm not sure how old I am in this photo.  I was a skinny, scrawny kid, so my age is just a guess.  Maybe I was six, seven, or eight.  I know I was old enough to have moved to Haw River from Reidsville.  The move came when I was four and I am definitely older than four.

Haw River was a paradise compared to life in Reidsville.  Haw River meant flush toilets, electrical outlets everywhere, and light bulbs in every room.  My father's decision to give up the Reidsville farming life and move to Haw River to work at Burlington's Western Electric plant was a wise one.

In Haw River, we even had a telephone and eventually a black and white TV and an air conditioner and a clothes washer and clothesline.  What with the cost of electricity and all, an electric clothes dryer would come much later.

I remember the phone number: 578-0874.  The area code has changed so many times over the years I can't remember it.  It was a wall phone with a rotary dial and a two-foot cord.  The phone was a four-party line.  If you wanted to make a call, you had to wait until your neighbors got off the line before you could dial.  You took the risk of a nosey neighbor picking up and listening to your conversation.

A multi-party line was much cheaper than a private line.  Even though my father was an employee of AT&T and got a discount on his phone bill, we had to save money where we could.  Money was very important to my mother.  Her obsession with money lasted to her death and beyond, but that's a complicated story that I'll save for another day.

Despite all the indulgences in Haw River, we still made the trip back to Reidsville every Sunday to visit my grandparents.  We would leave after 9:00 AM Mass at Blessed Sacrament and drive to Reidsville to spend the day.

At some point in his life, my grandfather, Albert Wall, decided he wanted a taste of the entrepreneurial life.  He didn't give up tobacco farming (that was in his blood), but he decided to buy a country convenience store.

He had one of his two daughters (my aunt Louise Carroll) and her husband and five kids run it, although I believe there were only four kids at the time.  They all lived in the apartment that made up the second floor of the store.  Notice the open window high up on the left in the photo.  That's where the apartment was.

I remember one special visit to the apartment.  Aunt Louise had cooked an opossum in the oven.  Yes, you read that right - an opossum.  I was never sure whether it was meant as a joke or whether it was a real deal meal.  I remember a lot of laughter, but I also remember tasting the opossum.  I think carrots, and maybe potatoes, were involved.

The store sold gasoline - Esso regular and premium.  The pumps are just out of view on the left of the photo.

By the way, how do you like my attire?  Plaid shorts with a striped shirt.  Very cool.  Very hipster.

There was an oil change pit outside.  It was about six feet deep with tracks for a car to drive onto.  It was a bit longer than an automobile and had steps for the mechanic (my uncle Eugene) to enter the pit to drain the oil from underneath the car and make adjustments.

The pit replaced a lift, which I'm sure was very expensive, if even available at the time.

In the store, behind the counter, was a large electric air compressor that would kick on infrequently to refill its red tank with air.  I suppose the compressed air was to fill flat tires.  I doubt there were any tools that operated on compressed air.  Compressed air was free at that time.  These days you have to drop quarters in a slot to inflate your tires.

The entire left-hand side of the store was used as a garage for auto repair.  The right-hand side was the actual store.

I don't recall much "mechanicing" being done in the garage.  I think the garage was eventually filled with a pool table and car repair ended.  Years later a mechanic bought the place, closed the store part, and opened an auto repair shop.

I think the auto repair place that replaced Carroll-Wall Esso has even closed.  I never see anyone there and the large garage door is never opened.  Grocery stores in town and convenient transportation put an end to it all.

I don't ever recall seeing my grandfather at his store.  Never.  I suppose he left it to his daughter and son-in-law to operate it.

I do recall seeing and listening to gossip from the gang of five or six "farmers" who were always at Carroll-Wall Esso.  In the winter time, they huddled around a wood-burning stove.  They sat in metal chairs which today would be called "retro".

They all wore overalls, had few or no teeth, and constantly spit chewing tobacco into a tin cup they kept on the floor by their chairs.

I'm guessing most were full-time alcoholics or were temporarily drunk.  No, I'm not guessing - they were hardcore.

I remember a large "drink box" which was filled with the little original Coke bottles.  This was a time when the little 12-oz. bottles were the only thing available.  They were not nostalgic.  Coke is the only drink I remember, but I'm sure Carroll-Wall Esso had RC Cola and possibly Pepsi and maybe Dr. Pepper.

Notice in the photo on the outside of the store are signs advertising both Pepsi and a glimpse of a Coke sign.  By the front door is a large thermometer which I believe has a Pepsi emblem at the top.

I don't remember any drinks that were not cola-colored - no Mountain Dew, Sprite, or Sierra Mist.  There was possibly 7-Up, but that's just a guess.  There were no energy drinks.

In the center of the store were racks of snacks and candies.  It was a wondrous sight to a kid my age.

Moon Pies, Honey Buns, and nabs (cheese and peanut butter) were big sellers.  I have a vague memory of ice cream, but I can't picture an ice cream freezer.  Maybe the ice cream is just coming from my imagination.  I don't specifically bread, milk, and sandwich fixin's, but I suppose those were possible.  I know it's the place you went to buy drinks and nabs for folks working in your tobacco fields.

I remember a collection of auto parts hanging on the wall behind the counter - fan belts, cans of oil and such.

I remember Dennis.  He was a little boy about my age who lived nearby.  Dennis and I would play around the store.  Many years later I would meet Dennis again at the American Tobacco Company where his mother and father also worked.  Dennis was a nice guy as both a little boy and as a grown man.

Despite selling enough sodas to pave the parking lot, aunt Louise and uncle Eugene would give up on the place and move on.   My grandfather sold the store and that was the end of his entrepreneurial life.
Posted by Ricardo Montobon at 9:40 AM 1 comment: 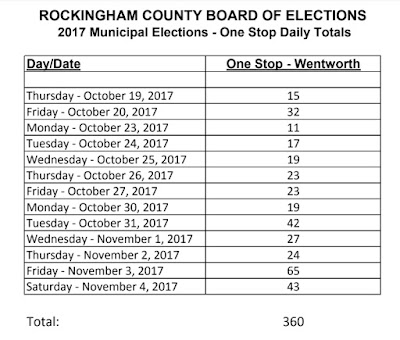 Municipal early elections have come in.  People are really excited about electing their city leaders.

From a low of 11 voters on October 22 to a high of 65 on November 3, 360 people crowded the polls over 13 days to register their obvious satisfaction with local leaders.

My sympathies go out to the poll workers who manned the voting booths.  It must have been a very boring experience.

Posted by Ricardo Montobon at 2:37 PM No comments: