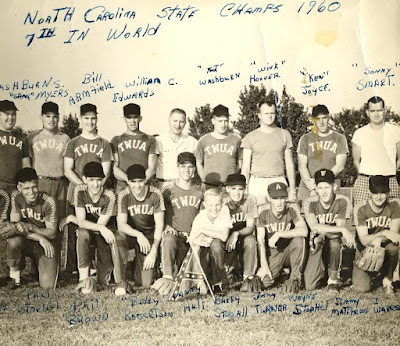 Can you spot the former Rockingham County Commissioner in this group?

Hint:  We was a very funny guy and threatened to beat my ass on a couple of occasions.

I have to wonder what the team was called.  Notice the Confederate flag planted in front of the group.

See something?  Say something.

The City of Eden's embarrassment continues to grow.  A fourth old man is being sought for involvement in the Tommy Woodall teenage hooker incident.  The suspect is believed to have possibly fled to Florida.  If you see an old man who looks a little too happy, call the Eden Poe-Lease.

A once famous County Commissioner 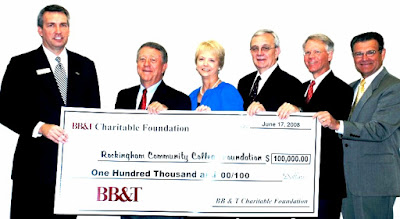 A miniaturized W.L. "Dubby" Pryor presents a $100,000 check to Rockingham County Community College.  Dubby was once famous for his good works, vast wealth and for being a super wonderful human being and County Commissioner.

Dubby was the first person to receive free money from Rockingham County for connecting his housing development to the W.L. Pryor Memorial Waterline that quite coincidentally runs past Dubby's property from Reidsville to the Dynegy gas turbine power plant.

Although Dynegy protested the waterline, saying a well on the Dynegy property was adequate, the Commissioners were certain a 20-mile waterline was needed for Dynegy.  Millions of gallons of water are poured out onto the ground weekly to keep the water from going stale in the little used line.  It seems few people wanted to connect to Dubby's waterline.

Dubby is also the first person to accuse the Neely Chronicle of being a front for a Communist propaganda machine (Russian or Chinese) because the Chronicle criticized the Rockingham County Commissioners.

Note that's RCC Presudent Bobby Keys on the far right.  This is a rare photo of Bobby without all his turquoise bling.

The News-Record and the Review have thus far protected Dubby's elderly fan base from the news of his possible involvement in an illegal gambling operation.  Only Star News, RCENO, and the Reidsville Review Review have reported the raid on Dubby's Ruffin Ranch.

It would have been much better if Dubby were suspected of defrauding the elderly out of their pensions, but a gambling charge will have to do in a pinch, if he is convicted. 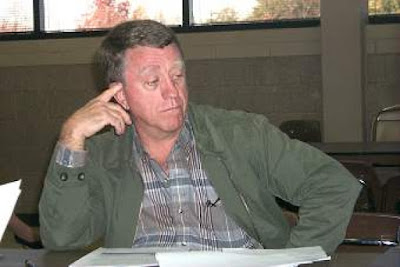 Sadly Dubby Pryor is reported to have fallen on some hard times.  Things are not what they once were for Dubby Pryor.  A bankruptcy may be involved, a heart attack, and unrelenting abuse from the Neely Chronicle who suspected Dubby was always up to no good.

Now things have gone from bad to worse.  Dubby is suspected of involvement in an illegal gambling operation on his Ruffin estate.  Rockingham County sheriff's deputies raided Dubby's ranch and confiscated evidence of a sweepstakes operation.

I hope Blitzer can keep The Zero and Dubby cases straight.
Posted by Ricardo Montobon at 4:22 PM 3 comments: 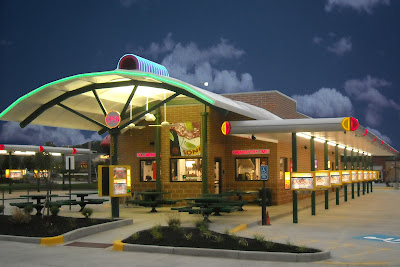 My memory is fading a bit in my later years.  Help me out here.

Is the recently closed Sonic on Freeway Drive the third or fourth Sonic in Reidsville?

Anyone who would open a Sonic in Reidsville must have some loose screws in their head. 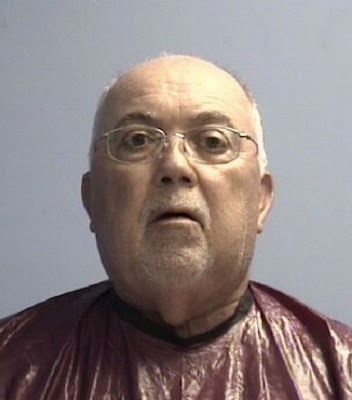 Sixty-six year old Draper barber Tommy Woodall has been busted for 12 counts of sex with two teenage girls.  Woodall is being held in the Rockingham County jail under a $5,000,000 bond.

A few years ago we were hired by the City of Eden to make a video production of the city.  Part of the assignment was to film different sections of Eden, including Tommy Woodall's barber shop.

We took our camera to Draper, made a few shots, including filming Woodall's barber shop from the public sidewalk.  Woodall's was closed at the time, so we made no effort to film inside or even set foot on the Woodall property.

We continued down the sidewalk, filming other locations as we went along.  Within minutes we were stopped in the parking lot of Jerry's Restaurant by the Eden Police.  Tommy Woodall was tagging along with the cops.  The agitated Woodall had called the Police on us.  He demanded to know what we were doing.  Why we were filming and who gave us permission to film his barber shop.  It was quite a scene.  Woodall demanded justice be done, the police seemed confused, and we were more than a little bit pissed off at Woodall for acting like such a damned fool over potentially getting some free publicity for his barber shop.

After several minutes of explanation and re-explanation, we agreed to never use any video of the outside of Woodall's building.  The police were satisfied.  Tommy Woodall wasn't satisfied. There seemed no way Woodall could persuade the cop to arrest us and confiscate our camera.

We reported our problem to the City of Eden.  They seemed to understand the dilemma. We were given an interior photo of Woodall's and told to use that instead of any video we might have captured from the sidewalk.  You can see the interior ceiling of Woodall's at https://www.youtube.com/watch?v=vvhDlbuY6pA  Watch at the 3:09 mark.  It goes quickly, so watch carefully.

Apparently, Woodall had a well-known reputation as an asshole.  It's so sad to hear he has been locked up for allegedly screwing some little girls.  The girls were reportedly pimped out by their mother.  The whole thing should have been a cakewalk for the happy-go-lucky Woodall, but a nosy neighbor got involved and called the cops on Mr. Personality.

The news is reporting the screwing took place at Woodall's Barber Shop. 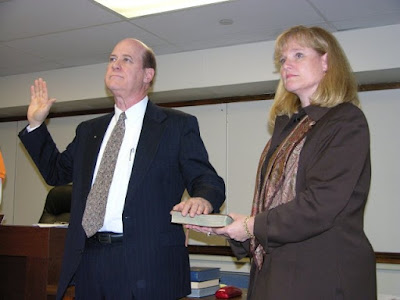 Rockingham County Elections Director Tina Cardwell describes the newly enacted Ron Price sign law:
General Statute 14-384 makes it a misdemeanor to remove lawfully placed signs, including political signs.  Complaints as to an alleged violation of this criminal statute should be directed to law enforcement by the complaining party, not the County Board of Elections.

There is also a provision in General Statute 163-32(e) that makes it a misdemeanor to remove lawfully placed signs on right-of-ways.  An alleged violation of this statute should also be reported to local law enforcement by the complaining party.

Please note 163-32(b).  This section of the statute describes the period as to when it is lawful for political signs to be placed on right-of-ways.