We are pleased to announce Reidsville's SUPER BUFFET Chinese Restaurant is offering country music to accompany your egg rolls and wanton soup.  Come in and enjoy the cool crooning and the all-you-can-eat special.

Click here to read everything you need to know about SUPER BUFFET.


Posted by Ricardo Montobon at 8:00 PM No comments: 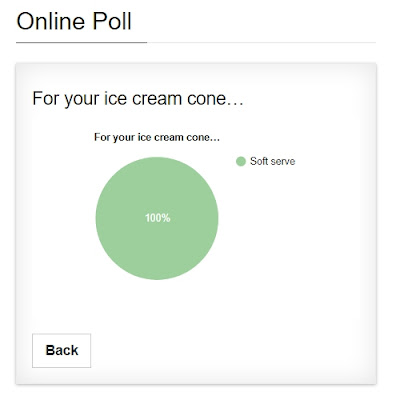 Reidsville Review readers unanimously agree soft serve is the best bet for your ice cream cone.  Well, actually only two people have voted in two days, so it's not much of a contest.

Posted by Ricardo Montobon at 10:10 PM No comments:

You don't want Humulin, do you?

First let me to tell you I have health insurance.  It sorta pays for my medications.

I got a call today from my pharmacist.  He regularly calls me to verify what drugs he should deliver for the current month.

But, for the second month in a row he started the conversation with - "You don't want Humulin U-500 this month, do you?"

What?  That's an odd way to start a conversation.  That's the second time he's asked me that question.  He asked me the same thing last month  Isn't it his job to sell me medications?

I take Humulin every month.  I've been on it, or something like it, for four years.  My health depends on Humulin.  Why wouldn't I want it?

But, he knows why I might not want Humulin this month.  It's because last month my Humulin alone cost me $650 with insurance.

Humulin is type of medication that was invented nearly 100 years ago.  The formula was sold by its inventor for $1.  He believed insulin should be freely available to everyone who needs it.  It is insulin.

It turns out my pharmacist had guessed correctly.  I did not want my insulin this month.  One time was enough.  It would not be paying $650 this month.

Apparently he has a lot of experience with people not being able to afford their medication, even essential medication.  I suspect a lot of people have to say "no" to their medicine or give up non-essentials like food, electricity, rent, gas, etc.  This is especially true in Rockingham County

I know Humulin is important to my health.  In the long run, my life probably depends on regularly taking my insulin.

I said "no" insulin to his question because I have made special arrangements to get my insulin somewhere else.  I'm not going to tell you what that arrangement is, but you should know my insulin will not come from another cheaper pharmacy. I suspect my pharmacy costs about the same as any other pharmacy

My insulin will come from a source that most people will never consider because they know nothing about that source.  Many will have to do without insulin or whatever the important medicine they might be taking,  I will have my insulin, but it won't come from a pharmacy.

After thinking about my pharmacist's call for a few minutes, I began tearing up for those people who I know cannot afford their medicine and who do not know my secret source.  I had to hold the tears in because my wife was sitting nearby and I didn't want her to see my weakness.

Healthcare in this country is in a terrible mess.  Donald Trump does not have the answer.
Posted by Ricardo Montobon at 6:34 PM 1 comment: 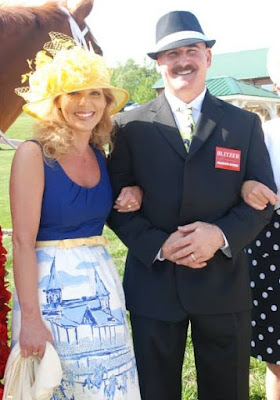 Cindy and Craig Blitzer were very happy during the good old days.  Probably not so much now.

Until now I've avoided saying anything about the District Attorney Craig Blitzer story.  The affair was shaking out to be nothing more than a couple of elected District Attorneys taking advantage of their positions.  Two DAs bilked taxpayers by hiring their wives to do nothing than collect $100,000 in ill-gotten booty.  Nothing new here, right?

Now the Greensboro News' Danny Battaglia has revealed that Cindy Blitzer, wife of Rockingham County DA Craig Blitzer, was enrolled as a full-time student at South University at the same time she was employed as a full-time employee of the Caswell County DAs office.

Apparently Blitzer and Caswell County DA Wallace Bradsher hired each other's wife to do nothing except collect a paycheck.

The scam began to fall apart when an employee in Bradsher's office reported the impropriety to the SBI.  The employee was naturally fired for squealing and then it all started tumbling down around Blitzer and Bradsher.

Now Battaglia has revealed the best part of the story.  Battaglia says Craig Blitzer paid one of his assistant District Attorneys to take an Algebra I course for Cindy Blitzer.

Apparently South University is one of those "Universitys" that issues credit for taking a high school level course online.  How does the University know who is actually taking the course when the course is administered on the internet?  Answer is it doesn't know.

I wonder whether Blitzer's employee took the Algebra course on his own time or during work hours.

But, wait...the story gets better.  Another one of Blitzer's DAs took an online high school Algebra II course for Cindy Blitzer.  There is no word on what the second employee received for his work on Algebra II.  Whatever he received, I'm sure it included a heaping of Craig Blitzer's gratitude. and perhaps an Amazon gift card.

The Blitzers resigned months ago when the investigation got to cranking.  As far as I know, Bradsher is still serving as the Caswell DA.

And the story continues to evolve...

Posted by Ricardo Montobon at 1:05 PM No comments: