Does anybody really care? 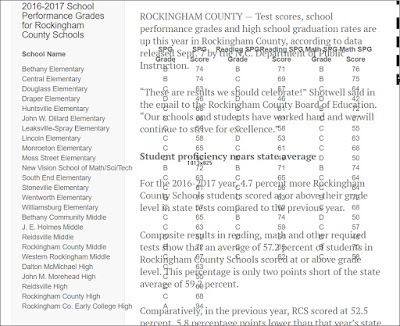 Will anybody at the Reidsville Review even notice there's a problem?

Go here to see the mess.
Posted by Ricardo Montobon at 6:49 PM No comments: 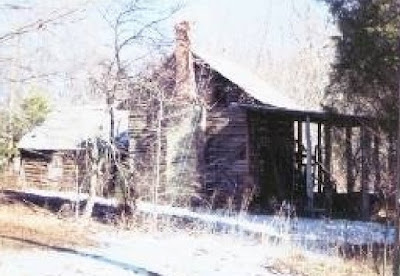 This is my house.   This is where I was born.  Actually, I was born in Annie Penn Hospital, but this is where I lived for maybe my first couple of years.  My maternal grandfather owned the house for many years.  I don't know if he or his family ever lived in the house.

The front part of the house (to the right) was a farm equipment shed that was added many years after the house was abandoned.

The white area on the ground in the photo is snow.

I don't know whether the house had electricity or running water when I lived there.  It certainly had neither by the time I came into possession of it.

I don't know any of the history of the house, other than it's where I lived.  I'm sure my family was not the first occupants of the house.  The house has to be at least 100 years old.

I recall being told a story about my mother cooking a pot of tomatoes in the house and being so enraged at something that my father had (or had not) done that she threw the entire pot of near boiling tomatoes at a wall in the house.  My mother was not an entirely stable woman.

I now regret giving permission for the house to be torn down, except for the front shed part.  It would have eventually fallen down, but it would have stood beyond my lifetime.  I should have let my heirs deal with it. 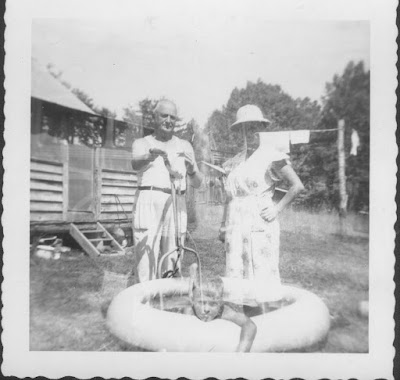 This is an interesting partial photo of the backside of the house.  It's a double, or possibly a triple exposure.  The woman in the hat, who is my tomato-slinging mother, is not standing in an inflatable swimming pool with my older brother and my paternal grandfather (William Moore) is not mowing the water.  I'm not sure any of the three were even anywhere near the house.

Notice the clothesline in the background.  This is a good indication that there was not an electric dryer in the house.

I like the steps that led out the back of the house.  They give a genuine rural feeling to the premises.  It was indeed a very rural home.

My maternal grandfather lived in a much nicer house not more than 50 yards away.  The nicer house, though not refined, is where I now live.  Yes, that's right...I live only 50 yards from where I was born.

On the surface, it seems I've lived a sheltered life.  I've only moved 50 yards.  But there's been a lot of life crammed into those 50 yards. 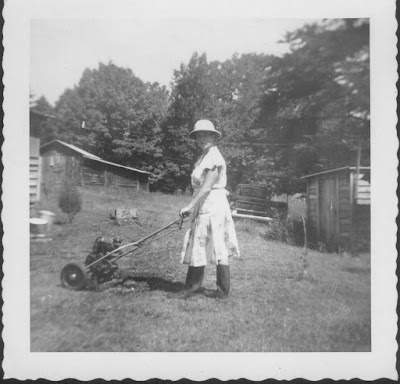 This is another shot at the rear of the house.  I assume it was made at the same time as the first photo or my mother never changed clothes.  Either option is a possibility.

When I was in high school, I remember wearing the same pair of rubber boots that she is wearing.  Besides being somewhat unstable when it came to cooking tomatoes, my mother was a very frugal woman.  I can tell you some tales about her frugality that will make you shutter.

I also remember wearing the same pith helmet she is wearing.  I was never told the story of the pith helmet, but I suspect it is associated with the time my father served in the military in India.

The building in the distant background still stands.  It is much larger than it appears in this photo.  It was used by my maternal grandfather to store tobacco that had been dried and other farming odds and ends.

The small building to the right is an outhouse.  There was no bathroom in the shack or in the next house that my family moved into after leaving the shack.    I was too young to care whether we had a bathroom with running water.  Most of the time I just shit in my pants and let someone else worry about it.

I will show you the second house in a later story.

Between my mother and the outhouse, you will see what looks like an abandoned truck.  I would not bet that it was abandoned.  It may have well been our family car.

I am amazed that mother appears to be mowing the lawn with a gasoline-powered mower.  It's definitely an old mower, but a gas-powered mower seems particularly extravagant for my family.

If you've been paying attention, you probably noticed the clothesline has disappeared.  That's either magic or the result of the multiple exposures.

When I was four years old, my father made a decision that would change our lives.  I will tell you about that decision at a later date.

Hopefully, my older brother can contribute something to this story.  I have no memory of living in the shack, but I am sure he does.

I thank the Reidsville.Review for publishing these stories about my family. 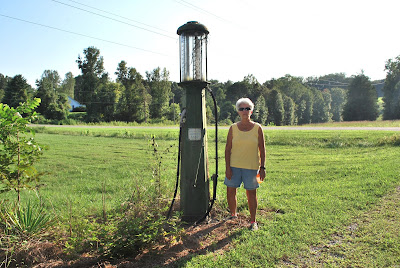 This is my Grandfather's gas pump.  Well, it's actually our gas pump now.  Grandpa passed away in 1969.

The pump stands beside the driveway that leads to our house.  Spokesmodel Debbie stands a tad over five feet, so I'm guessing the pump is about eight feet tall.

Again I'm guessing, but I'd estimate the pump is 75+ years old.  The farmhouse was built in the 1920s, but I doubt the pump was put in when the house was built.  Grandpa ran the farm on mule-power.  He originally had no need for gasoline. 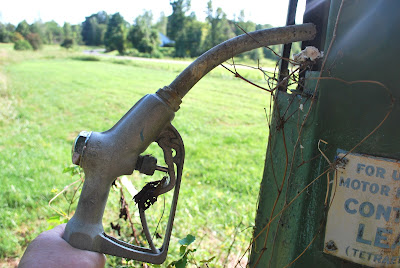 Here's a close up of the pump nozzle.  It's still  in pretty good shape. 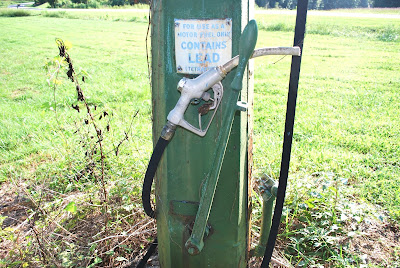 I've removed the nozzle from it's holder on the side of the pump and placed it with the pump handle.

To pump gas from the underground storage tank you pushed the pump handle back and forth and filled the glass container at the top of the pump.

The black rubber-like hose that connects the nozzle to the glass container is also still in good shape.  That has to be some tough-ass hose to have withstood 75 years of weathering. 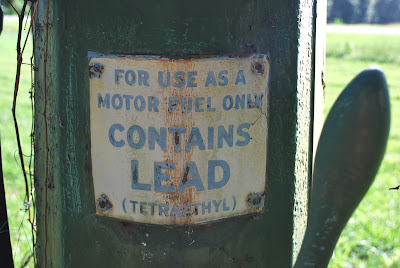 Because the pump is much older than I am, I'm again guessing the "CONTAINS LEAD" warning was added well after the pump had been installed.

That's "TETRAETHYL" at the bottom of the warning label.  I have no idea what "TETRAETHYL" is, but I know it was introduced in the 1920s as an aid to engine compression.

The U.S. government didn't become concerned about lead in gasoline until the 1970s.  I don't remember whether the warning label was on the pump when I was a little boy.

There is another identical warning label on the opposite side of the pump. 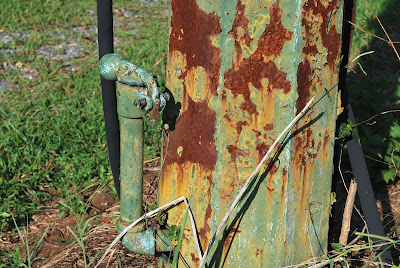 I'm going to take another guess with this pipe on the side of the pump.  I believe it was opened to allow air to enter the underground tank as the gasoline was pumped into the glass gas container.  The pipe prevented a vacuum from being created in the underground tank.

I suppose it could have also been used to pump excess gas back into the underground tank.

If you know more than I do about old-fashioned gasoline pumps, please speak up.  I could be wrong.

All I remember is pulling the tractor up to the pump, cranking the handle, filling the glass container, and then draining the gasoline into the tractor.  It was a helluva thrill for a young kid.

Obviously rust has started to attack some parts of the pump.  I'm hoping my son will remove the rust and restore the pump to it's original Pure Oil blue color.

Some people, who rented the house for a short period of time, painted the pump green.  They also did some really dumb things to the interior of the house. 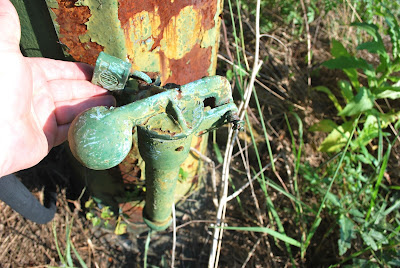 This is a close-up of the pipe.  That's a lock in my hand to prevent the pipe from being opened to breathe into the underground tank. 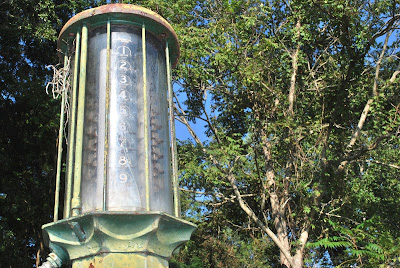 This is a view of the glass gas container.  It's numbered from the top down with 1-9, which represents gallons.  I know it filled from the bottom up.  The reverse numbering makes no sense to me. 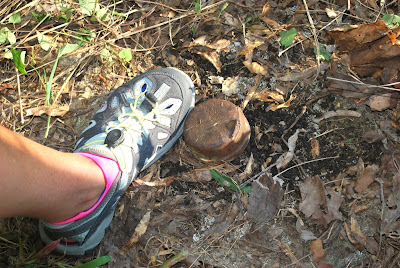 Debbie has her foot planted beside the steel fill cap to the underground tank.  You can't see it very well, but the fill cap is on a concrete square near the pump.  I have to be careful not to mow over the cap.

I've been offered several thousand dollars for the pump, but so far I've resisted the money.  It's my heritage that keeps the old pump in my front yard.