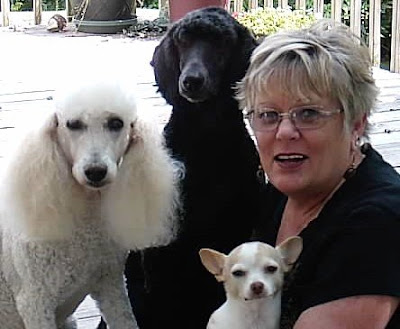 Remember this face?  No, not the dogs...the other one on the right- it's TERRESIA SCOBLE.

Scoble resigned from her highly paid job as Economic Developer for Downtown Reidsville after she was caught shoplifting from the Reidsville Walmart.  Scoble held a City of Reidsville taxpayer paid position.

Apparently Scoble needed some doggie treats and some toothbrushes and lacked the necessary funds when she was Walmart "shopping".

Well, she is back!  Friday she filed to run for a seat on the Reidsville City Council.

If con man Donald Trump can be elected President, why not shoplifter Terresia Scoble on the City Council?

Scoble is a graduate of Ruffin High, if that means anything.

THIS ELECTION IS GOING TO BE A WILD RIDE! 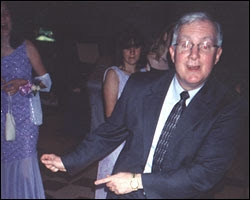 Boogie Man and now City of Eden candidate for Mayor Garry Tudor cuts a rug at what looks like a prom.  I'm not sure whether Tudor was a chaperone or a prom guest.

Tudor and school embezzler Wendy Hoover spawn Phillip Raeburn are looking to win the top job in Eden.  Anyone who votes for Raeburn or Tudor truly does not give a shit about Eden. 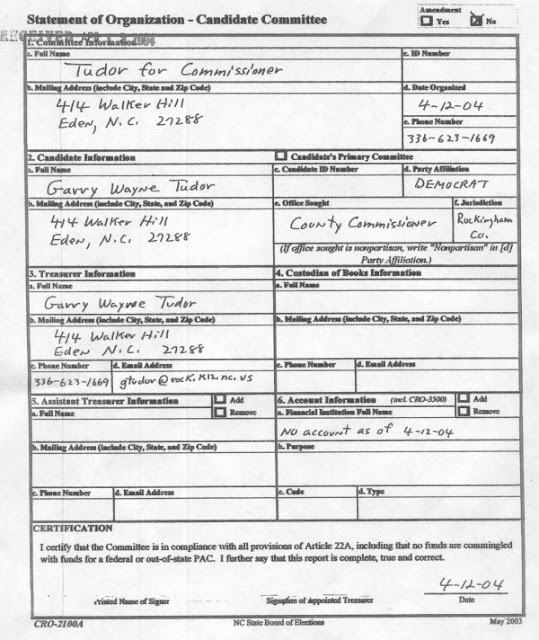 I even tried to show the evidence to the school board, but they all just sat and stared at me like they do to everybody who is foolish enough to address the board. 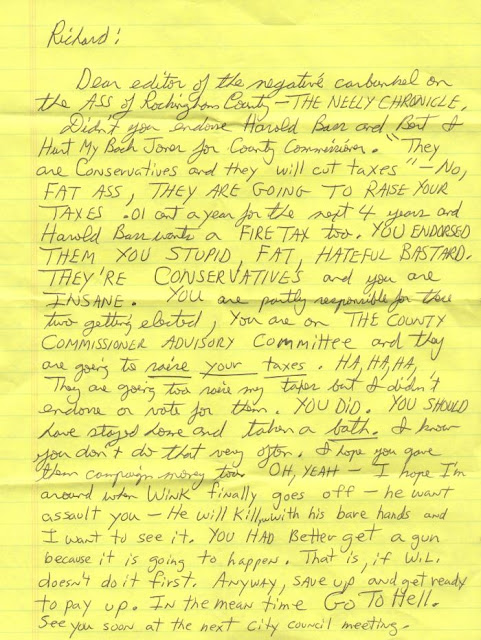 Notice the word "commissioner" in the two documents.  It is strange how closely the two writings resemble each other.  It has to be a coincidence. 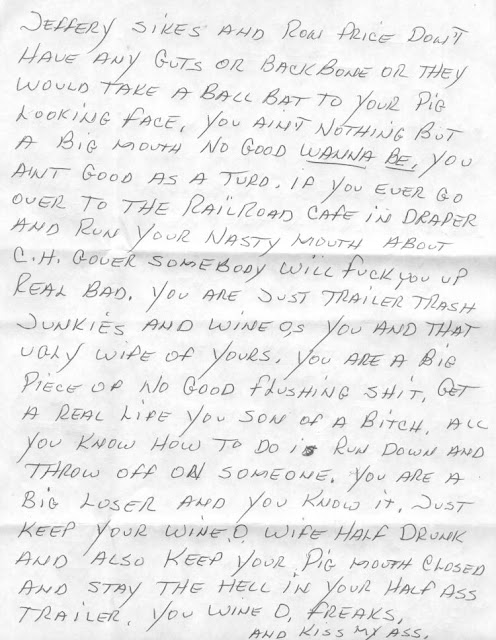 Here's another note I received from the anonymous source.  Notice how Jeffrey "Sikes" is intentionally misspelled, at least I assume it was intentional. 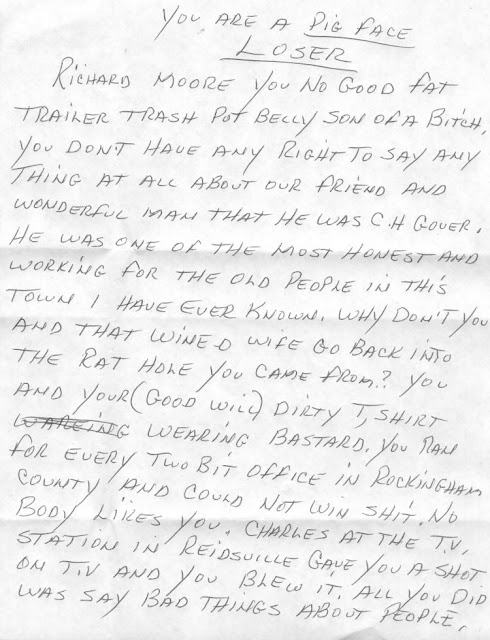 Another note that resembles the Tudor candidate filing.  I'm not suggesting anything, but it's just weird. 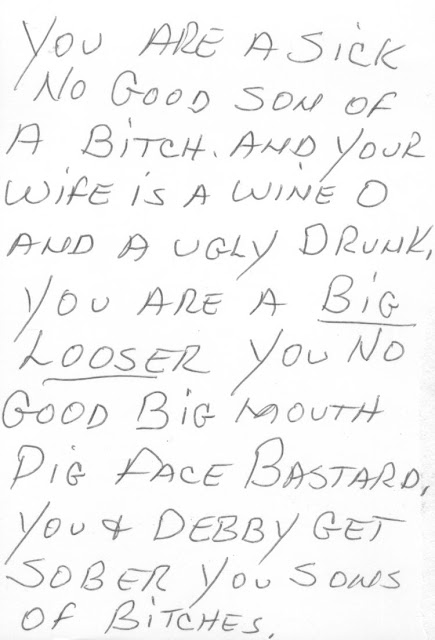 And one more note from Mr. Anonymous 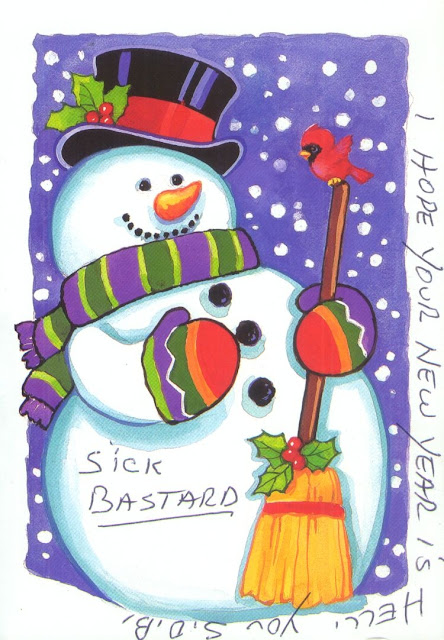 Here's a Christmas card I received from Mr. Anonymous.  The text from the card is shown below. 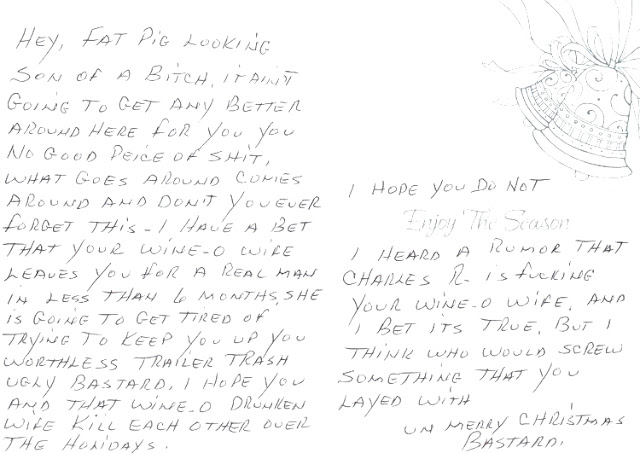 I love the way Mr. Anonymous accuses my "wine-o" wife of porking "Charles R."  You gotta believe anyone who writes such trash should not be the Mayor of Eden...Reidsville maybe, but not Eden. 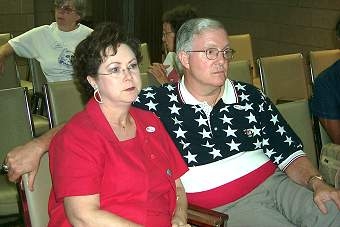 Garry Tudor decked out in an American flag displays his patriotic fervor at a County Commissioners meeting.

Tudor will always be remembered for singing the official North Carolina anthem "The Old North State" at a candidates forum when he unsuccessfully ran for the NC House of Representatives.

Click here to get a taste of good Christian candidate Garry Tudor.  It's a lovely event, but notice the attendance is a tad sparse in the church during Tudor's rendition of "He Touched Me".  And then there's "If God Didn't Care" and "Peace in the Valley".

The song was written in 1835 and sung by Garry Tudor during a NC House campaign forum.

Carolina! Carolina! Heaven's blessings attend her!
While we live we will cherish, protect and defend her;
Tho' the scorner may sneer at and wittlings defame her,
Still our hearts swell with gladness whenever we name her.

Tho' she envies not others, their merited glory,
Say whose name stands the foremost, in Liberty's story,
Tho' too true to herself e'er to crouch to oppression,
Who can yield to just rule a more loyal submission?

Then let all those who love us, love the land that we live in,
As happy a region as on this side of heaven,
Where plenty and peace, love and joy smile before us,
Raise aloud, raise together the heart thrilling chorus.


Posted by Ricardo Montobon at 10:38 PM No comments: 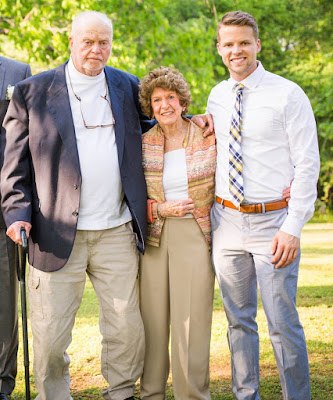 He's a member and employee of the Osborne cult, grandson of tax and spend County Commissioner Wink Hoover, and son of school embezzler Wendy Hoover.  He is Phillip Raeburn (right) and he has registered to run for Mayor of Eden.

His pastimes include Jesus, worshiper, crossfitter and tennis.

He has been endorsed by the Head Custodian at Bethany Elementary School.

YOU HAVE BEEN WARNED! 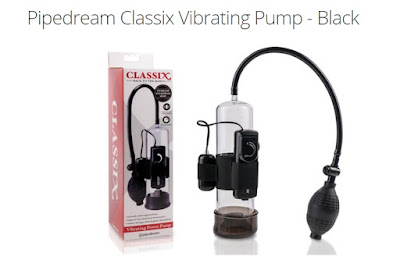 Groupon is well known for offering discount coupons on a wide variety of items.  We've bought many Groupons for dinner at nice restaurants and I just recently ordered a king-size mattress from Groupon.

Groupon has expanded into the sex toy market.  Shown above is a Classix Vibrating Pump that you put on your knob, flip the switch, and relax.  Act now to receive your penis pump for only $16.99.  Supplies are limited, so order soon!

Click here to see Groupon's special offer on the penis pump.  At the bottom of the penis pump page is a link to other exciting sex products.  Be sure to check out that link.