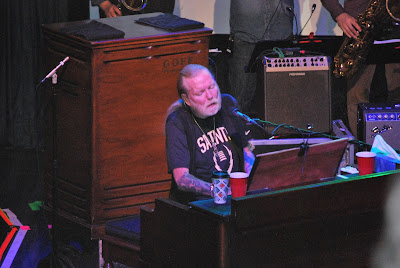 Do you remember Watkins Glen?  That's Watkins Glen, NY and the year was 1973.  It was the site of the largest music festival ever staged.  There were 600,000 people in attendance.  One man died in a parachuting accident and two teenagers disappeared - forever.  It made 1969s Woodstock festival look like a backyard party with a few friends.  There has been nothing like Watkins Glen since that time.

This frail looking man, who is almost 70 years old, was the star of the Watkins Glen show.  He could rock then and he can still rock.

I know, I've attended about five of his shows since October, 1970 when I first saw him perform with the Allman Brothers Band at Western Carolina University in Cullowhee, NC.

This is Gregg Allman.

Lamar Williams replaced Berry Oakley, but Lamar died of cancer.  He was replaced with Allen Woody, who died of some mysterious illness or a drug overdose.  Who knows?

Guitar players and drummers were replaced several times and keyboard players were added and then fired.  Chuck Leavell played the piano for several years before moving on to the Rolling Stones.

Gregg sang with the "Brothers" in 1971 on what is the best live rock album of all time - Live at the Fillmore East.  If you've never heard it, go now and buy a copy.  You will not regret it.  You can try clicking here to get a small taste of the Allman Brothers.  The audio is not great.  Gregg's vocals are lost in the background.

Gregg has been married six times, including once to Cher for a few years.  He's had maybe six children, all of which are musicians, except one.  He's been addicted to alcohol and all manner of drugs.  He's had a life-saving liver transplant due to hepatitis caused by a dirty tattoo needle.  Please notice his tattooed sleeves.

He's appeared on Cher's variety TV program.  Do you remember that piece of crap show?  Gregg sang a tune with Cher.  There were dancers in the background.  Gregg and Cher wore matching outfits.  It is 40 years later and I still shake my head in disbelief.

He's written an autobiography entitled "My Cross to Bear",  I have a copy which my daughter gave me for Christmas.

He's performed on Saturday Night Live with the "Brothers:.  He's played bit parts in a few films.  Remember "Rush"?  Gregg played the drug dealer.  When he takes his long blond hair out of a ponytail, he definitely looks like he can play a drug dealer.  His music is featured on many, many sound tracks.

My suite mate (J. Fred Knobloch) in college became a successful songwriter in Nashville, TN.  Allman recorded one of his songs for the movie "Next of Kin".  You can decide for yourself how much you like the Allman version.

Allman was the honored guest at the Fox Theater in Atlanta.  The Fox show is where famous musicians gather to perform songs written by the guest.  Gregg Allman has written a lot of tunes.  The edited show lasted two hours.

He's been inducted into the Rock and Roll Hall of Fame.  He wore a tuxedo with a top hat and cane for the event.  He was stoned out of his mind at the time and he slurred his way through his acceptance speech while the "Brothers" nervously squirmed beside him.

Despite his fame, he seems a very quiet and somewhat reclusive person.  I recently caught him doing a 60-minute TV interview with Dan Rather on AXS TV.  It's the most I've ever heard the man speak, including the time when I spoke to him personally after a concert in Birmingham, AL.

He's truly lived the life of the Blues Man.

Gregg carried on with the Allman Brothers until they all finally called it "quites" at the end of 2014.  He's had an on-and-off again solo career with different hired musicians.  Now he is performing as "The Gregg Allman Band".

The crowds are much smaller than Watkins Glen, but Gregg Allman is still "da man" when it comes to singing the blues.

He just this week performed at the Cone Denim Center on Elm St. in Greensboro.  I'm told the theater will hold 1,000 people and it was full.  There is open floor space and seats in the balcony.  Thank goodness we had balcony seats.  Balcony seats were $80 each and floor space was $40 per head.

Most, but not all, of the folks had gray hair on their heads.  All of the ushers looked to be senior citizens.  The bar runners, who served drinks to the elderly, were pretty young.  All of the beer came in tall 24-oz cans that ran $9 each.  A 16-oz bottle of water was $4. 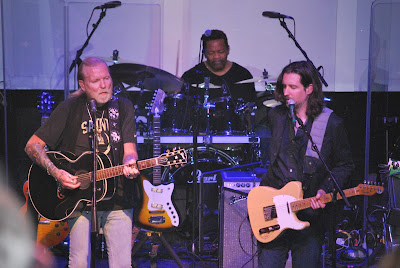 In this photo a slightly stoop-shouldered Gregg Allman (left) appears his age and the hard road he has followed throughout his life.  Despite his almost Johnny Winter appearance, Gregg is reportedly now clean and sober.  That's a good thing because he almost died.

Gregg is best known for playing the Hammond organ, but he can certainly strum a guitar.  He reportedly taught his older brother to play guitar when they were children.  Even with a short life, Duane Allman went on to become one of the top guitarists of all time.  Gregg did not demonstrate any of his special guitar skills in Greensboro, but I can assure you he can play the guitar better than he plays the organ.

Gregg took up his guitar for several songs that included "Melissa" and "Midnight Rider".  Of course, the crowd sang along with the these two tunes.

In case you are wonderin', Gregg opened the Cone show with "Don't Keep Me Wondering".  No, it wasn't "Statesboro Blues" which the Allmans frequently used as their opener.

Gregg opened with the song I played over and over while I was wonderin' about a girl I would eventually marry.  When "Don't Keep Me Wondering" wasn't on the turntable, it was "Can't Lose What You Never Had", another Allman Brothers song by Muddy Waters.  I played "Can't Lose" in case I needed consolation.  Fortunately, I didn't need consolation.

Gregg closed the show with "Whipping Post".  It was totally re-arranged from the Allman Brothers famous "Whipping Post".  Gregg's version is slower, jazzier, less intense.  And, it certainly didn't last 20 minutes like the Fillmore East days.

"One Way Out" was the encore number which took ten minutes of loud cheering from the audience to make it happen.  I didn't hear the whole song because I had to rush to the restroom to keep from peeing in my pants. 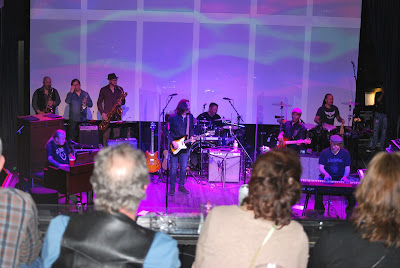 Above is a photo of the entire Gregg Allman band.  Don't count the four heads in the very front.  Even with good seats, it's not easy to get a decent concert shot.  The guy in the leather vest kept bobbing and weaving.  I usually had to point my lens between him and the woman in the beige top and hope for the best.

Gregg is seated at his organ on the left.  Behind him are three horn players - a tenor sax, a trumpet, and a baritone sax.  A guitar player stands in the middle, a drummer in the background, a bass player beside him, then a percussionist in the right background.  A keyboard player is in the right front. 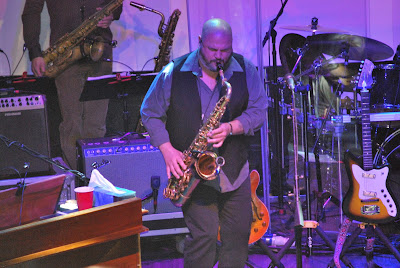 Gregg took a break while his band featured a nice solo by the tenor sax player and some pounding by percussionist Marc Quinones. Quinones is the only player from the Allman Brothers Band left with the Gregg Allman Band.  He is not an orignal member of the Allmans, but he has been the third Allman Brothers drummer for many years.  Yes, that's right, for many years the Allmans had three drummers - Jaimoe, Butch Trucks, and Marc. 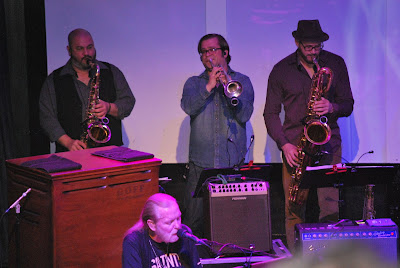 Today Allman's music has much more of a jazz twist.  He still rocks, but many of the arrangements have been designed to point in a jazz direction.  Gregg's three horn players definitely point towards jazz.  The Allman Brothers almost never used horn players.

Maybe more than three-quarters of his show were old Allman Brothers tunes, mostly written by Gregg.  But the added horns breathed new life into the songs, some of which are approaching fifty years of age.

The Gregg Allman Band was loud, no doubt about that.  But, the sound was well balanced.  You could hear every instrument and all the vocals.  My ears did not ring after the show.  I would say it was the second best live concert sound I have ever heard.  Nothing will match Jethro Tull live in Baton Rouge.

Interestingly during the ride home after the Allman show, my date suddenly muted the XM radio in her car.  She never mutes her radio except when she receives a phone call.  She said the song playing was annoying the hell out of her by repeating a musical phrase over and over.  I noted the song was a Little Milton tune.  Gregg Allman has credited Little Milton as a major influence in his vocal style.

Allman spoke very little during the concert, but you could understand most of what he said.  His smooth southern drawl was more troublesome than the sound system.  He is a Georgia/Florida boy.

The Allman Brothers Band is frequently credited with creating the Southern Rock sound.  I understand the "Brothers" don't much care for the label, preferring to be called rock/jazz/blues musicians or better yet just musicians. 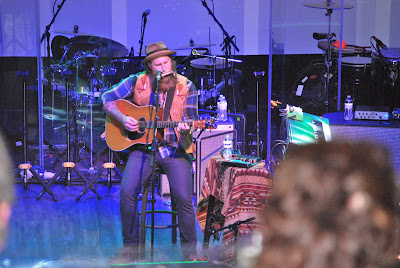 This guy opened the show for Gregg Allman.  He had a real nice voice and could play the guitar and harmonica very well.  He was half finished his set before he said he had been playing in Europe before joining Gregg.  He encouraged everyone to buy his new CD.  He said his name was Gabriel.  That's it.  No first or last name.  Gabriel can go either way.  He never said what the title of his CD is.


Posted by Ricardo Montobon at 2:11 PM