Star Trek: Where No Man Has Gone 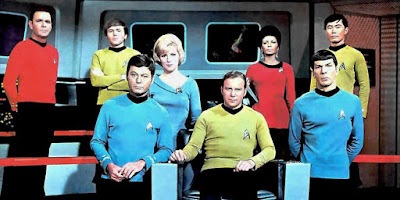 Fifty years ago the Star Trek TV series launched onto our screens.  The series lasted from 1967 through 1969.

I don't remember watching the original series, but I do recall watching the program in syndication many years later.  Every day Star Trek was re-aired we would all rush to the TV room in Albright-Benton dormitory at Western Carolina University to catch the latest episode.

We loved it,  We thought it was a marvelous thing.  Of course, we were all "smoked up", but I'm sure that had nothing to do with our enthusiasm.

Since then I've seen all the original Star Trek movies.  I think there were six of them.  The movies were vastly different from the TV series.  The movies had budgets, but the TV series was produced on a shoestring.

On September 16, 2016 BBCA (the British Broadcasting Corporation of America) began re-running the original series.   For reasons I don't understand, the re-runs began with season 3 and then went on to seasons 1 and 2.  It took about four months for the BBCA to re-broadcast all the original 79 episodes.

I recorded all 79 episodes.

Here we are a full year later and I have to admit I have not watched all the episodes.  I think I have about six episodes from season 2 that have not been watched.

Frankly, I am amazed I've gotten through as many episodes as I have.  Fifty years later the show is awful, regardless of what I've smoked.

The script writing was terrible.  Somebody should vaporize with a Phaser all Star Trek scriptwriters who are still living.

Every episode was a copy of the episode from the previous week - the Enterprise explores a new planet, Dr. McCoy argues with Captain Kirk and Mr. Spock, and Scotty the Engineer promises to repair the Enterprise's engine in the nick of time.

And the big feature of every episode?....Captain Kirk wins a fight with a space alien and a space babe falls for the charms of Kirk.  Kirk spent more time kicking ass and grabbing ass than Donald Trump.

I don't know if I'll ever get around to watching the last six episodes.  It's too painful.  Watching the final six episodes may have to be my "final frontier".